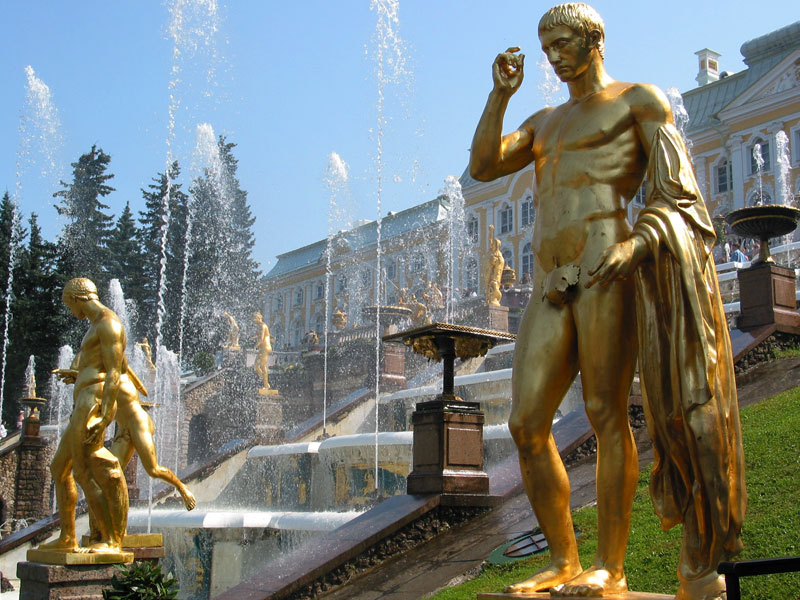 “The Russian Versailles”, “the Capital of Russian Fountains”, Peterhof is an immensely luxurious royal estate, lying on the shore of the Gulf of Finland (Baltic Sea), a combination of several palaces and parks, the “capital of Russian fountains” and “the Russian Versailles”. The estate was founded by Peter the Great and shortly after 1710 the tzar had a beautiful park with several palaces built.

The focal point of both the Lower Park and the Upper Garden is the magnificent Grand Palace (Bolshoi Dvorets) with the Grand Cascade (Bolshoi Kaskad) in front of it. The original palace was built for Peter the Great in 1714-25 and in 1745-55 was remodeled to its present baroque glory by Bartolomeo Rastrelli, the architect of the Winter Palace in downtown St. Petersburg.

Despite all the damage done to the Grand Palace during WWII, its interiors have been carefully restored and are truly breathtaking.

The Grand Cascade, which goes downhill from the palace towards the Baltic Sea, is one of the largest fountain ensembles in the world. From a channel goes through the park to the pier, where hydrofoils and boats from St.Petersburg arrive. Multiple fountains and pavilions (the Monplaizir Palace, Marly, the Hermitage- not to be confused with the Hermitage museum) are scattered all over the park. In a quiet part of the Alexandria Park there is the Cottage palace of Nicholas I, which unlike many other palaces has the royal living quarters carefully preserved.

The Upper Garden is a pretty baroque “formal garden” which separates the Grand Palace from the St Petersburg-bound highway. Beyond the limits of the seemingly endless royal parks lies the town of Peterhof. It has a population of 82 thousand and is renowned throughout Russia for the “Raketa” wrist-watches, which are produced there.

Peterhof is original name of the estate and the town is Peterhof is the German for “Peter’s yard”, “Peter’s home”. Note, that between 1944 and the early 90s the town was called Petrodvorets, and some guide books might still list it under that name.

In the summer time an exciting way to reach Peterhof is by hydrofoil, which will take you from the Winter Palace pier to Peterhof in just 50 minutes.

(Open 10 a.m. to 5 p.m. The Grand Palace is closed Monday. The fountains work from early May to early October).